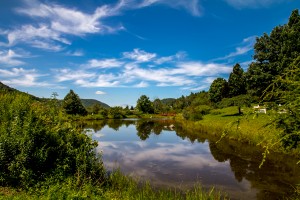 In 1958, William O. Nannen, a local businessman, conservationist and political leader, donated land to build the new Cornell Cooperative Extension. The eight acre site was part of the Nannen farm and construction of the Extension building was completed in the spring of 1961. The Soil and Water Conservation Service constructed a pond on the site in 1965 to show agricultural people good pond construction and the benefits of having a farm pond. The pond is now known as Lake Nipponica.

In the spring of 1974, John Ploetz started working for Cornell Cooperative Extension as an aide in horticulture three days per week during the summer. His previous employer was the Davey Tree Expert Company of Ohio. As landscape and tree moving supervisor in the Northeast United States and Canada, John had vast experience with trees. The eight acres of land behind the Extension office were growing into weeds and brush, so John drew plans for what now is known as the Nannen Arboretum.

The name Nannen was given to the arboretum to recognize William and Sadie Nannen who not only donated the land, but were very instrumental in raising needed funds. They were honored by the planting of two Colorado Blue Spruce trees which were named for them.

It took a long time to get started. Dave Bruce, Director of the Cornell Cooperative Extension at that time, formed the first committee to manage the arboretum, and under his direction the arboretum became a reality.

Historically, various volunteer organizations have maintained the arboretum. In February 2013, the property containing the Nannen Arboretum and the building for the Cornell Cooperative Extension was transferred to the Town of Ellicottville. At the time of transfer, the Nannen Arboretum Society was established.

In 1977, the young folks at the Young Adult Conservation Corp (YACC) were able to dig all the drains and all the holes for the red oaks which became the foundation for what is now known as the Northrup Memorial Nature Hall. John Ploetz had seen a similar hall in 1949 in New Hampshire at the home of Dr. Poling, a theologian from Philadelphia. His son was one of four chaplains that went down with the USS Dorchester during World War II. Mrs. Poling showed John what they had done as a memorial to their son. John had this in mind when he designed the Nature Hall at the Arboretum. The hall is available for weddings and outdoor educational events. See Arboretum Use Policy for details.

The original Ryoanji Temple Stone Garden was built in Kyoto, Japan over 800 years ago by Zen priests. The first replica in this country was built at the Brooklyn Botanical Gardens. John Ploetz was in charge of planting trees behind it. The Nannen Arboretum’s Temple was constructed in 1980 and is meant to be a meditation and contemplation garden. Granite grit is used as a ground cover because it is heavier than sand and the ripple raking resembles water. The large stones represent islands and were mined in Akron, New York.

n 1986 the Al Cox Memorial Garden was installed, donated by the Ellicottville Ski Club. The raised perennial flower garden, designed and maintained by Paul M. Kingston, provides a show of color throughout the growing season. The plantings and design were renewed in 2013.

The Chapman Nature Sanctuary, a formal planting of Kentucky Coffee Trees surrounding park benches facing a stone altar, affords a unique setting for special educational events and wedding ceremonies. The ” Celebration Walk” of memorial bricks leads from the main pathway to the sanctuary.